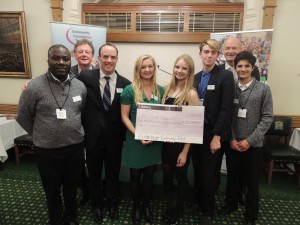 The Elmbridge Community Fund, launched in January 2015 has awarded its third grant to the Cobham based SAY Youth Club. A grant of £2,400 has supported the club’s expansion to support older teenagers.

Elmbridge Community Fund panel member, Dominic Raab MP for Esher and Walton and Parliamentary Under-Secretary (Ministry of Justice) presented representatives from SAY Youth Club with the grant cheque at an event promoting the local Fund at the House of Commons.

The grant will enable the Youth Group to expand their programme to provide weekly activities for teenagers in a safe environment, away from the streets, which can for some, ultimately lead to danger to themselves and crime.

We are delighted to have supported such a worthwhile local project and are excited by the huge potential of the Fund to support more and more local community and voluntary groups in the future.

Although Elmbridge is often perceived as a universally wealthy borough there are pockets of very real disadvantage and many people need extra support. The Elmbridge Community Fund works with existing charities and community groups to provide a simple way for local residents to support local communities in need.

This is a permanent fund that will grow over time. Founding donors have already come together to establish the fund and supported us to award our first three grants. Now we are seeking others to come forward to build the fund further.

By maximising Gift Aid your donation to the Elmbridge Community Fund can go further to support even more people, providing a very effective way supporting the local community.