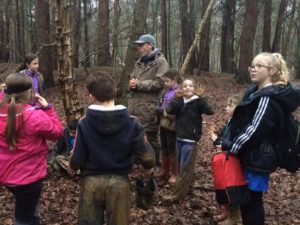 We awarded a grant of £2,200 to the Mighty Adventurers Association (MAA) for outdoor and Forest School sessions supporting over 1,000 vulnerable children primarily between the age of 5-12.

Mighty Adventurers creates opportunities to fuse the arts with forest school principals, with a largely environmental agenda through their workshops. Each session has a strong symbolic message teaching participants to look after themselves, each other, and the environment around them. Creating junk percussion instruments helps to increase awareness of recycling, the impact of non-sustainable lifestyles and highlights the difference between natural materials and those that should be recycled.

Children that had taken part in the workshops experienced some, if not all of the below;

an increased sense of community through all-inclusive activities such as drumming, feeling more inspired to take risks safely, developed music skills, an increase in teamwork and leadership skills, and increased observation skills in relation to their senses and the natural environment.

Having time outside and working with stories, was so successful that we began a weekly session with our young carers, and decided for these sessions to happen in nearby woods. From this, three of our year 6 young carers have taken up free places at the regular after school forest club, and this has given them an invaluable opportunity to shed their responsibilities and re-ignite their child-like play. One child was particularly struggling with the situation at home, resulting in regular outbursts in school with increasing violence. Having witnessed how well he responded to the session, we ensured he attended the young carers group and facilitated him joining the after school group. This child is developing a sense of belonging, increased his awareness of the local wild areas, and ignited a sense of responsibility to the world in which he lives in. This is a child who never played outside and admitted he preferred to live in the on-line world of computer games.

Since being involved in forest school his violent outbursts have significantly reduced. Through the club he has made a strong friendship with another young carer, and it is noticeable how carefully they look after each other during the sessions. Initially anxious and reluctant to engage in activities due to the fear of getting muddy, his confidence is growing each week and a sense of freedom is returning to his play. Thank you!