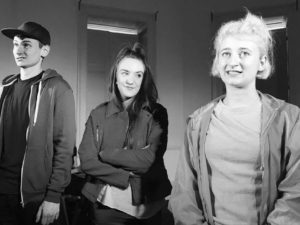 We awarded a grant of £1,034 to local theatre group Peer Productions to help support the tour of their play, titled ‘Hidden.’ This funding supported the group in touring over 30 schools throughout the year across Surrey to educate audiences on the important issues surrounding self-worth, mental health and self-harm.

Peer Productions deliver many theatrical shows which raise awareness regarding three areas; identity, crime prevention and health, with a greater focus on educating vulnerable young people on important issues such as self-harming within secondary schools.

‘Hidden’ aimed to dismantle the barrier and the taboos that often prevent these issues from being discussed openly, freely and without stigma. 90% of the students who saw the play acknowledged that they learned a variety of new things through watching this production, with 3 in every 4 students now feeling more confident in supporting a friend who is self-harming, as well as knowing where to seek help if they or someone they know are experiencing mental health problems. This equates to, with an average audience size of 200 students and 35 performances delivered, 7,000 vulnerable young people who have watched the play, over 5,250 of whom are now better equipped with the knowledge and confidence necessary to tackle mental health issues as they grow into adults.

With 1 in 4 people experiencing a mental health issue in the UK every year and 1 in 10 young people enacting self-harm during their teenage years, Peer Productions have toured ‘Hidden’ for the past four years. These 120 performances will have helped change the perceptions of almost 18,000 young people across the South East of England.

We very much value the contribution that Peer Productions make to the delivery of sensitive issues such as mental health, self-harm and teenage pregnancy, as their effective use of theatre maximises the importance of the messages in a clear and engaging way. It is important also as their work has had a direct effect on our learners. After the performance of ‘Hidden’, two of our Year 8 girls felt confident enough to talk about their own issues with self-harm and they are now receiving the appropriate support. The work of Peer Productions instigated this. All of the actors and directors who deliver the performances and workshops are professional, friendly and totally committed to the core values of using theatre to affect positive change.