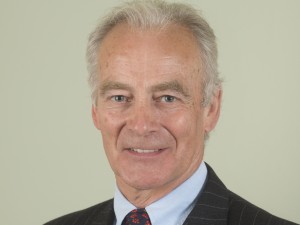 The 7th-13th November is Trustees’ Week, during which charitable organisations across the country will be showcasing the work of their trustees.

We asked former trustee and former Vice Chairman Peter Hampson to share his experience of working with the Community Foundation for Surrey:

“In early 2006 I retired from my role as the Director General of The National Criminal Intelligence Service. Most of my working life had been spent in the Police Service. I was a Metropolitan Police Officer for 27 years, moved to Surrey Police in 1994 as Assistant Chief Constable, then spent three years as an Assistant Inspector of Constabulary at the Home Office before becoming Chief Constable of West Mercia Constabulary in 1999.

Building close links within communities has always been important to me as during my professional life I frequently saw the positive impact that individuals and groups can make on the wellbeing of others.

Upon my retirement a colleague introduced me to the concept of Community Foundations and told me that one had recently been established in Surrey. I was already aware that, although Surrey was, and still is, regarded as a wealthy county, there were pockets of deprivation and unmet social need throughout. I wanted to volunteer my time and experience to an organisation engaged in addressing these issues.

I have taken a particular interest in the Surrey Supported Employment Fund (SSEF) and the Surrey Young People’s Fund (SYPF). The SSEF was established to help people who have a physical or mental disability to return to work whilst the SYPF enables young people to access opportunities for training or employment.

On retirement, I needed a worthwhile outlet for my time and energy. The Community Foundation for Surrey has provided this. The work that we do is of significant importance to so many in need and I know that it has made, and continues to make a real difference. The Community Foundation for Surrey owes a huge debt of gratitude to the donors as so much is being achieved with their generous support.

My nine-year term as a Trustee ended in September 2016. I have been asked to continue my association with the Foundation as a Vice President. I feel honoured to have been asked and am delighted to be able to continue. I look forward to making a contribution to the work of the Foundation for some years to come. I consider it a privilege to work alongside such dedicated Trustees and Group members and the hard working, highly skilled staff who do such excellent, accurate, and thoughtful work.”

The Community Foundation would like to take this opportunity to thank Peter for all of his hard work over the past nine years. We are deeply honoured that Peter has chosen to devote so much time and effort to helping us meet local need in Surrey and delighted that he has agreed to continue his work with us as a Vice President.